I recently had a connection request on LinkedIn that resulted in some wonderful correspondence. A former First Secretary at the British Embassy in Athens, while on a trip to the Mani peninsula in Greece to investigate the condition of Patrick Leigh Fermor’s house, came across my self-published chapbook, Kardamyli Poems. He wrote that he thoroughly enjoyed the poems and asked if he could quote lines from “Summer’s Holy Horoscope,” which, of course I agreed to! The poem is about a Byzantine chapel in Plata in the foothills of the Taygetos mountains above Kardamyli. The chapel has a surprising focus on the signs of the zodiac painted in fresco on its domed ceiling.

My British colleague is using the poem’s evocation of the holy to remind his constituents in York that their church, which is the oldest in their region at AD 968 (over one thousand years), offers a similar sense of the sacred.

Ilias Polimeneas, who was our local host in Kardamyli, was also a friend to Patrick Leigh Fermor, who was friend to Nobel-prize winning poet, George Seferis. I was grateful, during my stay, to be loaned Ilias’s well-worn copy of Seferis’s collected poems. Ilias also told me about the Plata chapel, and about Fermor. If you’d like to see images of the chapel and Fermor’s house, watch Before Midnight, a feature film starring Ethan Hawke.

As the Canadian leader and guide of the writing retreat in Greece will tell you, Kardamyli is one of “quiet magic”. See Suzanne Harris’s Olivewood and Laurel website for photos. 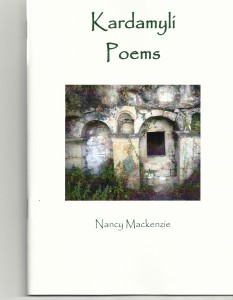 I have known Nancy professionally for over five years. In that time she has been contracted to work on several different projects for Alberta Environment, from writing the Water for Life Achievements document to finalizing environmental management frameworks and media specific technical documents for the Lower Athabasca Regional Plan. Nancy is reliable, creative and collaborative. She is always able to meet deadlines even when they are changed at a moment’s notice. She is very thorough when it comes to researching the topic area and will interview subject matter experts when necessary. I have complete confidence in Nancy’s abilities to provide expertise in any topic area she pursues.